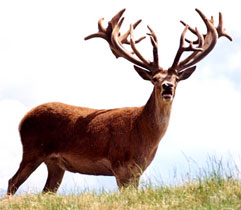 Known as the Monarch of the Mountain, the Red Stag (or Red Deer) is typically considered the most beautiful antlered animal on the planet. Mature bucks will usually have racks with 12 or more points and make for some of the finest trophy animals in any hunter’s collection. High Adventure Ranch is home to some of the most majestic New Zealand Red Stags in the United States scoring from 230 to over 400.

The Red Stag are the most challenging animal to hunt! The elusiveness of the majestic Stag will have you guessing the herds next move for hours on end. If an experience is what you're after, then you've met your match! For this reason we do not allow bow on these hunts. We've maintained a 95% success rate on these hunts since we stopped allowing archery.

In regards to the meat, the Red Stag is probably the best tasting venison in the world. In fact, it is typically what they serve at America’s finest Restaurants and historically has been a delicacy for the nobles of Europe. This tender meat is rich in taste, high in protein, low in fat. And, with the deer weighing in at about 400 to 650 pounds, you’ll have plenty of venison for months.